As such, it is covered in pieces in many parts of the Nix Manual. This page serves as a quick reference. Note, user environments are not currently covered at all in the NixOS Manual. User environments are mentioned in the Nixpkgs Manual: Chapter - Python Install Guide; there, a brief summary interspersed with Python install instructions.

In the opening of the Nix Manual - Environment Variables chapter:

The first directory contains the Nix tools themselves, while ~/.nix-profile is a symbolic link to the current user environment (an automatically generated package consisting of symlinks to installed packages).

In the opening of the Nix Manual - Basic Package Management chapter:

The main command for package management is

nix-env. You can use it to install, upgrade, and erase packages, and to query what packages are installed or are available for installation.

In the opening of the Nix Manual - Profiles chapter:

Profiles and user environments are Nix’s mechanism for implementing the ability to allow different users to have different configurations, and to do atomic upgrades and rollbacks. To understand how they work, it’s useful to know a bit about how Nix works. In Nix, packages are stored in unique locations in the Nix store (typically, /nix/store). For instance, a particular version of the Subversion package might be stored in a directory /nix/store/dpmvp969yhdqs7lm2r1a3gng7pyq6vy4-subversion-1.1.3/, while another version might be stored in /nix/store/5mq2jcn36ldlmh93yj1n8s9c95pj7c5s-subversion-1.1.2. The long strings prefixed to the directory names are cryptographic hashes[1] of all inputs involved in building the package — sources, dependencies, compiler flags, and so on. So if two packages differ in any way, they end up in different locations in the file system, so they don’t interfere with each other. Figure 10.1, “User environments” shows a part of a typical Nix store. 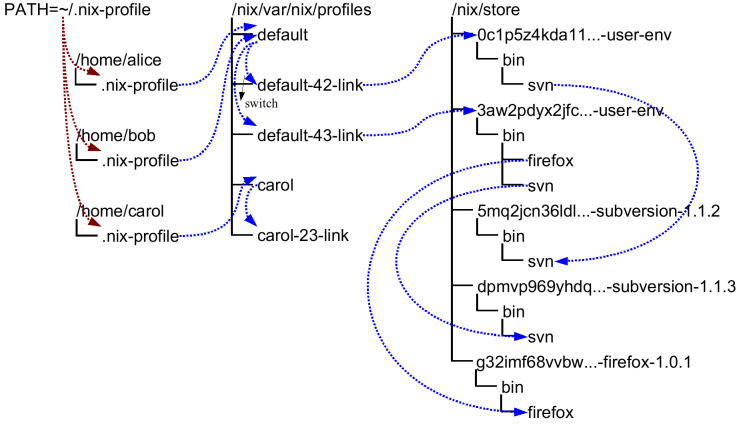 Of course, you wouldn’t want to type

every time you want to run Subversion. Of course we could set up the PATH environment variable to include the bin directory of every package we want to use, but this is not very convenient since changing PATH doesn’t take effect for already existing processes. The solution Nix uses is to create directory trees of symlinks to activated packages. These are called user environments and they are packages themselves (though automatically generated by nix-env), so they too reside in the Nix store. For instance, in Figure 10.1, “User environments” the user environment /nix/store/0c1p5z4kda11...-user-env contains a symlink to just Subversion 1.1.2 (arrows in the figure indicate symlinks). This would be what we would obtain if we had done

on a set of Nix expressions that contained Subversion 1.1.2.

This doesn’t in itself solve the problem, of course; you wouldn’t want to type /nix/store/0c1p5z4kda11...-user-env/bin/svn either. That’s why there are symlinks outside of the store that point to the user environments in the store; for instance, the symlinks default-42-link and default-43-link in the example. These are called generations since every time you perform a nix-env operation, a new user environment is generated based on the current one. For instance, generation 43 was created from generation 42 when we did

on a set of Nix expressions that contained Firefox and a new version of Subversion.

Generations are grouped together into profiles so that different users don’t interfere with each other if they don’t want to. For example:

This shows a profile called default. The file default itself is actually a symlink that points to the current generation. When we do a nix-env operation, a new user environment and generation link are created based on the current one, and finally the default symlink is made to point at the new generation. This last step is atomic on Unix, which explains how we can do atomic upgrades. (Note that the building/installing of new packages doesn’t interfere in any way with old packages, since they are stored in different locations in the Nix store.)

In the opening of the Nix Manual - Garbage Collection chapter:

nix-env operations such as upgrades (-u) and uninstall (-e) never actually delete packages from the system. All they do (as shown above) is to create a new user environment that no longer contains symlinks to the “deleted” packages.

Of course, since disk space is not infinite, unused packages should be removed at some point. You can do this by running the Nix garbage collector. It will remove from the Nix store any package not used (directly or indirectly) by any generation of any profile.

Note however that as long as old generations reference a package, it will not be deleted. After all, we wouldn’t be able to do a rollback otherwise. So in order for garbage collection to be effective, you should also delete (some) old generations. Of course, this should only be done if you are certain that you will not need to roll back.

--profile / -p path Specifies the profile to be used by those operations that operate on a profile (designated below as the active profile). A profile is a sequence of user environments called generations, one of which is the current generation.

The install operation creates a new user environment, based on the current generation of the active profile, to which a set of store paths described by args is added. The arguments args map to store paths in a number of possible ways...

You can force the installation of multiple derivations with the same name by being specific about the versions. For instance, nix-env -i gcc-3.3.6 gcc-4.1.1 will install both version of GCC (and will probably cause a user environment conflict!).

If --from-profile path is given, args is a set of names denoting installed store paths in the profile path. This is an easy way to copy user environment elements from one profile to another.

The upgrade operation creates a new user environment, based on the current generation of the active profile, in which all store paths are replaced for which there are newer versions in the set of paths described by args. Paths for which there are no newer versions are left untouched; this is not an error. It is also not an error if an element of args matches no installed derivations.

The uninstall operation creates a new user environment, based on the current generation of the active profile, from which the store paths designated by the symbolic names names are removed.

The --set-flag operation allows meta attributes of installed packages to be modified. There are several attributes that can be usefully modified, because they affect the behaviour of nix-env or the user environment build script:

Print the closure (runtime dependencies) of the svn program in the current user environment:

Make a picture of the runtime dependency graph of the current user environment:

Copy Subversion from a remote machine and then install it into a user environment:

In the Nix Manual - Files chapter:

The configuration files consist of name = value pairs, one per line. Other files can be included with a line like include path, where path is interpreted relative to the current conf file and a missing file is an error unless !include is used instead. Comments start with a # character. Here is an example configuration file:

The following settings are currently available:

keep-env-derivations If false (default), derivations are not stored in Nix user environments. That is, the derivations of any build-time-only dependencies may be garbage-collected.

In the Nix Manual - Appendix A. Glossary:

user environment An automatically generated store object that consists of a set of symlinks to “active” applications, i.e., other store paths. These are generated automatically by nix-env. See Chapter 10, Profiles.

profile A symlink to the current user environment of a user, e.g., /nix/var/nix/profiles/default.